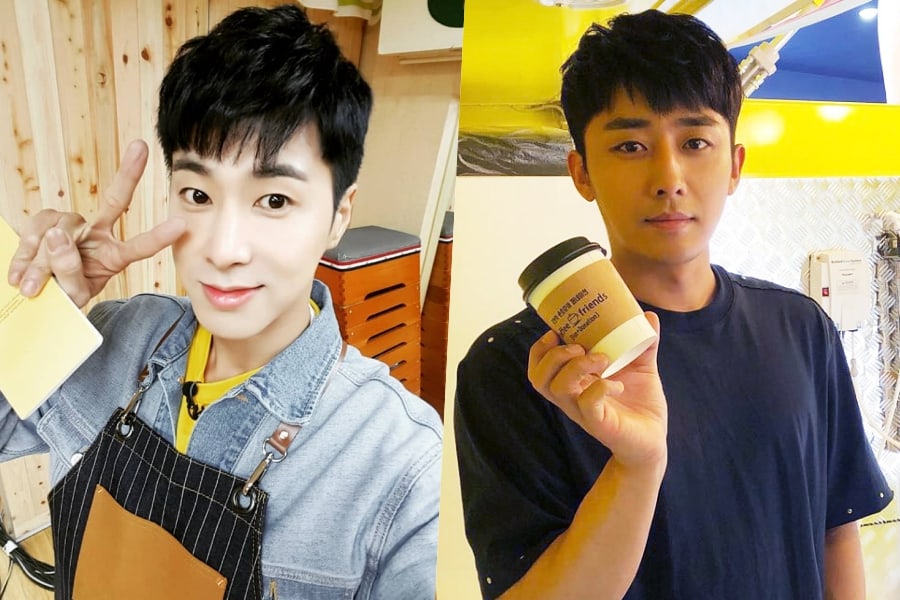 Former “Reply 1994” co-stars Yoo Yeon Seok and Son Ho Jun have been holding fun “Coffee Friends” donation events in which they give out free cups of coffee in return for donations. However, due to Yoo Yeon Seok’s busy filming schedule for the upcoming tvN drama “Mr. Sunshine,” he was unable to make their latest event.

On June 30, Yunho stepped in on behalf of Yoo Yeon Seok and joined his close friend Son Ho Jun for the donation project instead. The first 200 people to arrive at the event received free cups of coffee, and those who participated could donate however much they wanted. Yunho also reportedly took home the post-it notes given to him by his fans during the event.

Yunho later shared a photo from the event on Instagram and wrote, “First, I sincerely thank those who shared their hearts and participated in the donation. I worried last night whether it might rain a lot today, but the weather helped us to do a good deed on a day as nice as your hearts. The fourth ‘Coffee Friends’ event that Ho Jun and I participated in together was able to be completed successfully thanks to your warm hearts. Thank you!”

Posting the same selfie, Son Ho Jun wrote, “Thank you so much for participating despite the hot, rainy conditions. Also, thank you so much to Yunho, who took time out of his busy schedule to join me! I’ll continue to do my best during the promised time. Thank you, everyone.”

Yunho is currently appearing in the MBC variety show “Dunia.” Check out the latest episode below!