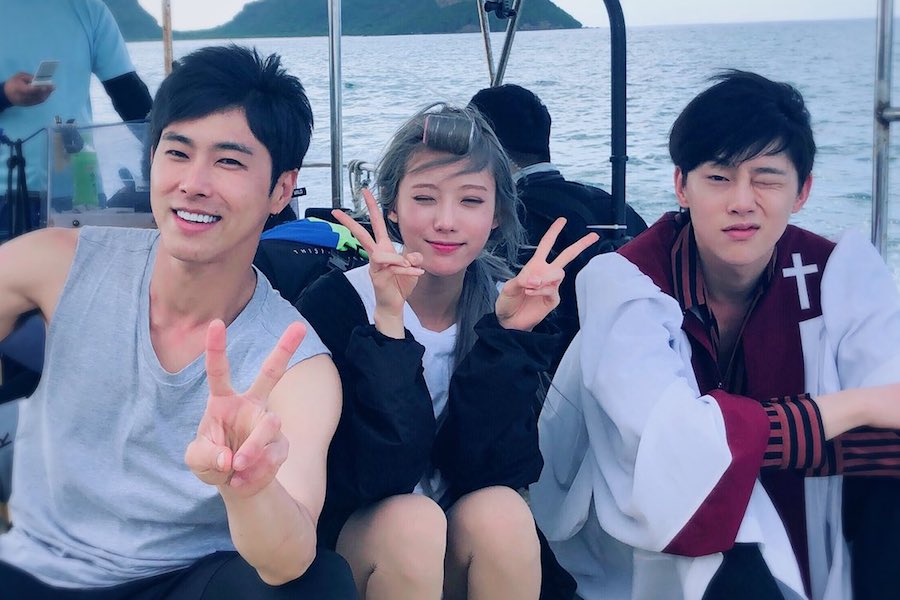 Yunho, Luda, and Kwon Hyun Bin are seen walking together along the shoreline when Kwon Hyun Bin starts the conversation by saying, “There is something I’m really curious about. You know those malicious comments?” Yunho and Luda immediately let out an “ah” as if they totally understand where Kwon Hyun Bin is coming from. He directs the question to Yunho and asks, “How do you deal with them?”

Yunho responds, “Malicious comments are my expertise.” He continues by mentioning that he has lots of memorable clips and memes, and he shares, “They made me thing…aren’t malicious comments in some ways interest as well? Whatever they said, instead of not reading the comments, I started treating them as interest. After this change in my attitude, I’ve realized something. Some people start off by not liking me because they don’t know me. However, as time passes and I keep showing my real self, I’ve had those people convert and become fans. They realized, ‘That’s just who he is.’”

He also adds how his appearance on “I Live Alone” was such a big help.

Luda speaks next and admits to looking up every malicious comment, and Kwon Hyun Bin chimes in, “I do, too.” Luda shares, “If someone comments that they don’t like an action I did, I try not to do that action again. But then I found myself having a list of all these things I can’t do, so I end up not knowing what to do. I can’t behave like this or say this, so then I spend so much time thinking, ‘Well, what can I do?’”

She continues, “You know, I’ve only been doing this for two years, and there are times when it’s so fun and enjoyable. However, every so often, reality sort of hits.” In this moment, Luda uses a slang word that Yunho doesn’t know. He stutters and asks what the word means, which makes Luda and Kwon Hyun Bin laugh.

The clip ends with Yunho thanking them for teaching him something new.

To find out how the conversation ends, make sure to catch tonight’s episode.