[trans] October issue of WITH magazine, Part 2 of the behind-the-scenes stories of Tohoshinki’s cover page photoshoot — Tohoshinki’s charms which even men fall for!

<Tohoshinki’s charms which even men fall for!>

When was the last time that we worked together with TVXQ… While preparing for the photoshoot in the studio within the city of Tokyo, I checked my iPhone in order to recall when that was, and would you believe it, it has already been 3 years ago!! Perhaps it was because I had been feeling the activity of the both of them constantly on TV, in movies, in magazines and compared to anything else, at their live concerts, it did not seem like it had been something that long ago. The cover appearance which I had continuously wanted to work together with them on from that time onwards has finally been realized in this issue. So a long time has also passed before it has been realized… While I was dwelling over this, “Hello!”, (I heard) the familiar voices which I had heard in CDs and at their live concerts!!! Tohoshinki, who made time amidst their concert tour to come, exuded a comfortable atmosphere which was again different from those artistes’ faces which were filled with overflowing anxiety while they are on stage. Of course, even with such an appearance, Tohoshinki are also as suave as them. While going “It’s been a long time~” and speaking with us, even the air in the studio received a “bo~ing” boost at their easygoingness.

While he was in the midst of trying out his outfits, Yunho-ssi and I stood chatting. While being thankful for the opportunity afforded by this job, I tried throwing a simple question at him, going “A live tour with 29 concerts in 11 cities nationwide, aren’t you tired out by such packed schedule?” “If I think of it as work or obligation,it would perhaps be too much for me (laughs). I am doing it because it’s enjoyable. The live concerts are something precious which we create together with the fans as we go along, and because this is something we challenge ourselves with.” Ah.. So this is it. Tohoshinki, who have not in the least changed from the first time we interviewed them, and who have always maintained this upright mindset. It is of course not just the ladies who resonated with this strongly in their hearts.

After completing the preparations, the photoshoot finally started! Amidst the various requests which were emerging in order to capture and emit the “present” of Tohoshinki, who possess the mature aura of men, the both of them responded to the said requests with “more than that requested” in an enjoyable manner. Starting from the staff who were checking the monitor, including the cameraman, the voices of “Great!!” kept emerging, but once the shots appeared, because they kept having new facial expressions the more the shots appeared, the photoshoot was not able to stop!!! (laughs). There is something known as the best subject for photography! And it is this!! These breath-taking soundless moments where the staff unanimously go “This facial expression… yes this is it!!”, how many times did this happen on this day… Thanks to them, the photoshoot was extended a little and although it is also a fact that the interview time was decreased, it was really shortened by only a very little bit. A little bit!!

Even during the interview, the both of them also responded with replies, with each and every phase reflecting their own thoughts. However, it is inevitable that the time for ending the interview soon approached closer, the more we thought, “We want to hear more from them!!” When they were greeting us as they were leaving, Yunho said, “When we did a photoshoot the last time around, you said “let’s do a magazine cover page some day”. It’s been realized”.

While going “So he.. remem.. remem.. remembered…!!!” and desperately trying to stop myself from crying from being moved by him, I said “Thank you!!!” while greeting him deeply with my heartfelt feelings. While going “Someday, let’s again have a cover page with Tohoshinki on the cover no matter what!!! To my heart’s content!! Extra large page size!!”, I pledged strongly to myself deeply within my heart.

Behind the scenes of Tohoshinki’s cover feature of the japanese magazine “with” for its October issue, to be released on 140828!

HQ cover picture can be seen at the end of the issue’s promo video:

With online, posts: video, part 1 and part 2
Posted and Shared by TVXQ! Express

-captions: walking on the path to becoming TVXQ, from rookies who were closely-watched to continuously rising new stars; and then becoming the best singers, creating countless TVXQ hits; constantly the fans’ choice; TVXQ’s fans have personally chosen the best 5 songs.-

Peng Yu: We would like to introduce the 5 TVXQ songs that Chinese fans like the best. Just what are these 5 songs? Do the two of you want to guess? Where do you think each would be ranked?
Yunho: For 5th place… we have sung many songs. Because we sang so many.. (Hui Lian suggests Hug).. Hug feels like it would be somewhere in front. It feels like Spellbound. Because it is the most recent release.
Hui Lian: Did you sing it at the concert too?
Yunho: Actually we have not let (Chinese) fans see it – t/n: this took place before the Shanghai car show- so whether or not they will anticipate it more.. I think it could be 5th place.
Hui Lian: So 5th place is Spellbound, okay.
Victoria: Let’s take a look.
Zhou Mi: The 5th place is…
-Spellbound-
END_OF_DOCUMENT_TOKEN_TO_BE_REPLACED

-The blogger did not state when Yunho made his visit to this pet shop.-

Yunho’s autograph:
“To: Cheongdam-dong Honey Scalp~ (for animals keke)
Please be happy always~
(Hope that your life” will be filled with only good things always!”

Tohoshinki is scheduled to appear in the October issue of Vogue Japan (release on 140828). This issue includes a making video of the photoshoot and a message from Tohoshinki

Here is a preview of the video, it includes an NG cut of the comment (Yunho said the 10th Anniversary instead of 15th) that’s been edited out from the upcoming Making Video:

Also Here are translations of some tweets on the topic by Magara Eri (@magaratta), an Editor:

Which one of them to open the bottle of Champagne, Yunho-san let Changmin-san do it, “Changmin should try/challenge it!” Changmin-san looked a bit nervous but he tried it.
We were able to feel the strong brotherly relationship where they are bonded with trust at the photo shoot.

Changmin-san was a bit concerned/worried about Yunho-san who had Champagne splashed over his face. After finishing the photo shoot, Yunho-san stepped out to wash his face before the interview. Changmin-san said, “Can you wait for him a little? I am sorry.” to show care/respect to the staffs.

“I really had a great experience.” Changmin-san greeted us politely with full smile. “I did my best.” Yunho-sand said. (I am sorry the photo shoot was really a hard one!><) Tortoise and Champagne.. if the photoshoots of Vogue are good memories/experiences for Tohoshinki, that is really great. Thank you very much!

in addition, the comment in the short movie is edited out as a NG scene. The OK scene will be included in the making film so please look forward to it.

The date, Aug 28th on which the Oct issue will be on sale is coincidentally very close to the date for their Live DVD [Tohoshinki LIVE TOUR 2014 TREE] being on sale. So we decided to celebrate each other splendidly!!! That was the concept behind the shooting this time.

We will show you a glimpse of the behind the shooting scenes.
→http://www.vogue.co.jp/videos/detail/2014-08/25/the-gift-of-celebration

Actually, when we were thinking about the concept of the photoshoot, we initially planned to let Yunho-san open a bottle of Champagne. At the venue, Yunho-san told us, “I had experience in opening bottles of Champagne. So it should be okay!/Do not worry!” And everyone was “ Sounds great!” and counted on him. However, when the photo shoot started, we soon realized that the bubbles of Champagne have to splash from the left to the right to make the photo look the most beautiful. In order to make the possible, they needed to stand in the positions switched from their usual ones. Changmin-san’s hair was parted in the right and his bang was a bit covering over his left eye.. so if he stands on the right, we could not see his face well because his bang was covering his face. So, they needed to keep their usual positions and we were going to let the bubbles of Champagne splash from the right to the left. As soon as we suggested, Yunho-san said, “You know, I have done this before. So this time, Changmin should try it!” Changmin-san looked delighted to hear that and said,”Since I have not done it, I wanna try it!” It looked as if the very kind/caring older brother was letting his younger brother to do the task. They both looked so cute/adorable. However, there were only a limited number of bottles so failure was not really allowed. So I asked Changmin-san, ”Do you want to practice opening a Champagne bottle first?” (I am sorry Changmin-san!). Then Yunho-san pointed out, “If you let him practice, you gonna miss the best shot/best facial expression.” Ohhhh, certainly!!! I understood immediately what Yunho-san said. Subsequently, we were able to take the first shot with a bit of accident where the Champagne directly splashed over Yunho-san’s face (!). Changmin-san was able to experience opening Champagne bottles for a few times. We were able to take the best and cool pictures of Tohoshinki in celebration. After finishing the photo shoot, Changmin-san said, “The last time, we were able to take pictures with the tortoise and this time, we were able to have a Champagne shower.. we really had a good time.” His words touched our heart deeply~. Also, I sincerely thank from my bottom of heart for your wonderful teamwork.

VOGUE JAPAN, all links included in the post
JP-EN Translations by @beriko0214, original posts 1 & 2
Posted and Shared by TVXQ! Express

Previously, we have mentioned the pillar ads that were put up to promote the release of Tohoshinki’s 「LIVE TOUR 2014～TREE～」 on 08/27!  Now the set has been completed as a huge poster, which looks like the cover of Tree Tour’s Pamphlet, was added on the same building, this time it was for its front board~

Pictures by @gabrielle_0206
Posted and Shared by TVXQ! Express

On 140824, a picture of Changmin with Kyuhyun, Minho and Suho together in a dancing studio appeared on SNS

Note: We aren’t sure how it reached the fans hands though, so if any of our readers have an idea, please tell us~

Picture via KIYOMIN珉
Posted and Shared by TVXQ! Express

Pillar Ads were seen in Shibuya, and they show pictures from Tree Tour’s Pamphlet: “Tree of Life” 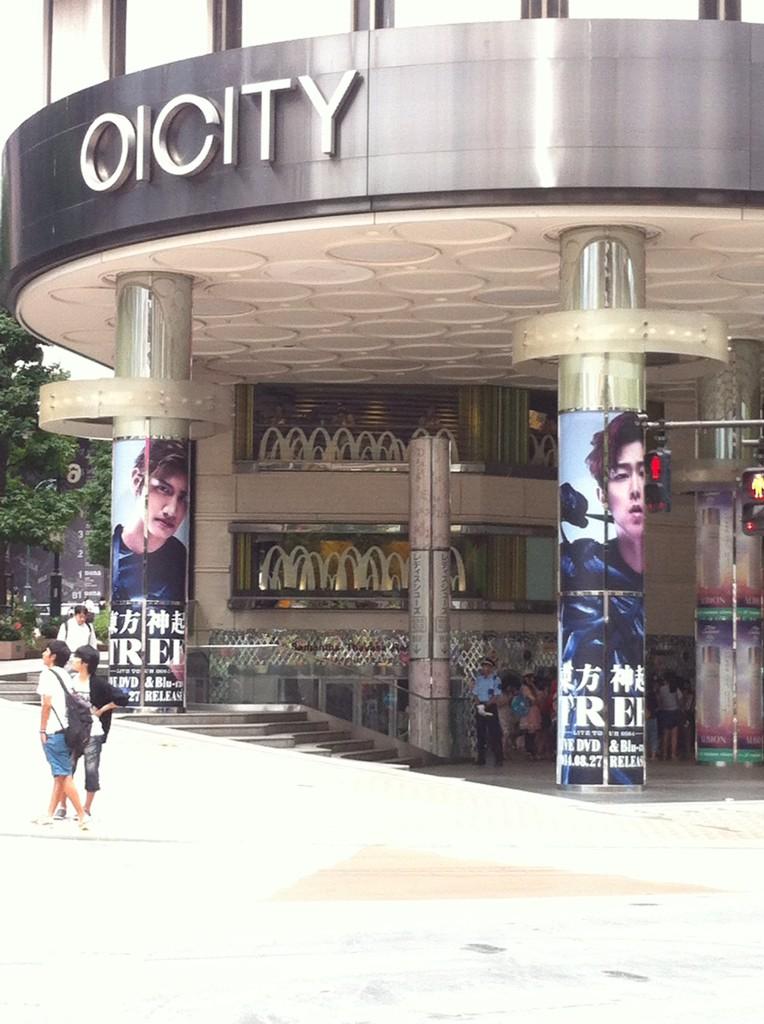 Pictures by @sychangdh and @gabrielle_0206

Posted and Shared by TVXQ! Express