Yunho was featured in the November issue of JP magazine “Hanryu Pia”, released on 10/21~
Remember to order your own copy at Amazon Japan: here (available on Kindle as well), or at other online stores such as CD Japan. 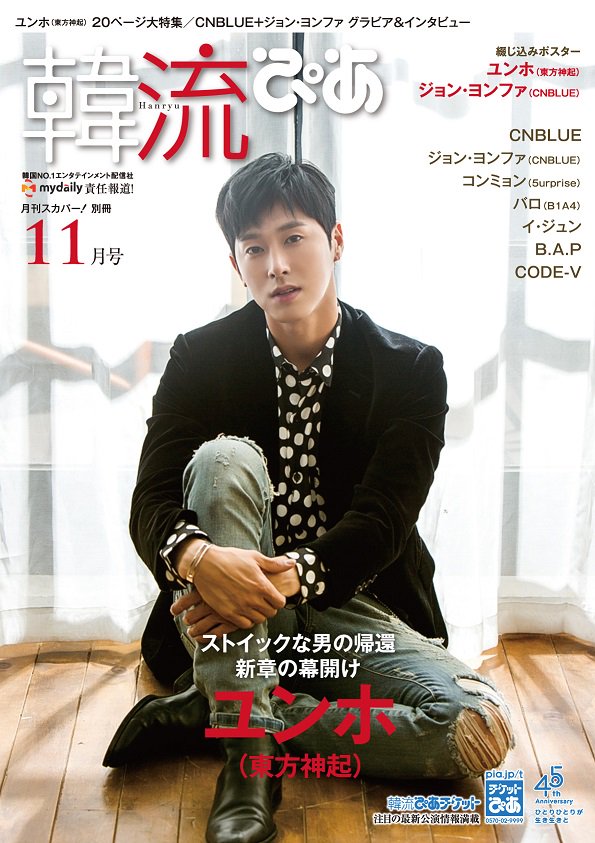 {t/n: Due to my busy schedule, I am unable to translate the whole text. This covers only Q&A parts.}

When I showed him the issue of Monthly Skyper where they were on the front cover,
YH: 2011? Wow, we were very young. We haven’t changed? Really? (laugh)

YH: When I took the offer for Melo Horic as my comeback work, I thought that it was a bit of challenge to me. The lead role “Uno” that I played became very popular after an incident, but I need to play his previous character, afterward character, and another character after he falls in love with a woman.. he has many different characters/colors so the role seems to be very challenging to me. But this diversity in his character is the charm point of this role and I also like that he is also innocent. I am a bit embarrassed to say this by myself but I think we have something common (laugh). In addition, this drama has many different features. It is a love comedy but it is also a thriller. It has a funny side and a dark side. The amount of dialogue is huge (laugh). I was interested in this drama and I made up my mind to take this opportunity.

YH: After I saw the complete series a little while ago. It turned out to be a pretty interesting drama. I was delighted to see our director was very happy too. I have kept telling people that I wish to meet with myself who have matured through my work, through my acting career. So this time, through acting the lead role, “Uno”, I think some change has evolved in me. I started to think that is not it cool to live like Uno? He is very optimistic, cute.. yet he is pretty mature and strong/energetic. I adore him. I hope to find someone like him in me.

YH: I guess I am lucky (laugh). When I work together with many other people but keep being sincere (to me and others), I gradually gain something really important.

YH: Of course, I thought about roles that I wish to play after being discharged from my duty. But I did not think that it was appropriate for me to bring my thoughts on the table. During my enlistment, there were many stories and I was able to have many experiences. So instead of speaking out that I want to do this or that, I wanted to show people myself being matured in that environment in a natural fashion, in the way suited to me.

Q: Uno fell in love with Han Ye Ri/Han Joo Ri (Kyung Soo Jin) without knowing that she has a split personality. What will you do if you find out that someone you fell in love with has a split personality?
YH: Well, it is a very heavy question (laugh). Well, if I were in the situation, I will support her but also tell her about it. If I really love her from the bottom of my heart, then I should cherish her shortcoming as a man. These days, the way that I think about love & relationship has started to change. I used to love Jun Jin Hyun-ssi’s character in the movie, “My sassy girl”. She was my ideal type. But these days, I do not have my ideal type anymore. Besides love & relationship, I guess I have started to change too. For example, if something happens, I do not need to force myself to think something along the line, “I was not like this before.” “Previously I had this kind of personality.” Etc. I want to erase all such fixed way of thinking and I want to look at/think about myself with a new pair of eyes. I guess these are the changes that I made after having sometime alone to myself during the two years.

Q: Do you want to take roles in movies, stages and musicals?
YH: Yes, of course, if I have any opportunities. In particular, I am interested in movies. If I find a very interesting movie role and if that suits me, then I am already prepared to do all my best more than anyone. Hahaha! I am speaking myself too big (laugh). But to be honest with you, I still am getting training for acting. I still need to learn a lot… In addition, in order to become a good actor, I need to watch/observe people, not only actors but also professionals/experts in documentary films…of course not to forget about people around me. I enjoy watching people and I want to take each one’s charm in me.

YH: During a break in my military duty, when I could, I contacted Changmin and we had meal together. We talked a lot about our future seriously, but our keyword was always, “Tohoshinki from now on”. The most important thing for me is Tohoshinki. In Tohoshinki, Jung Yunho does exists. But separating from Tohoshinki, when I have activities as Jung Yunho, I also started to desire that I want to become someone who does not have anything to feel ashamed of himself. Please be anticipated.. I will appeal a lot of charms as Tohoshinki and as Yunho (human being).

About SM Town Live World Tour in July:
YH: When we decided the set list, I was really nervous because Changmin was not available. I prepared hard while shooting the drama. And before the stage, SHINee members asked me, “Hyung, why aren’t you nervous and why can you enjoy yourself on stage so much?” To be honest with you, I almost cried.. because I was really nervous, more than anyone, at the back stage (laugh). But as soon as I appeared on stage, I thought, if I enjoy my performance, then audiences will do so too. My heart was beating hard with excitement. I really want to thank everyone who made my heart filled with excitement. I think I will continue to have this passion for a long time (laugh).

YH: In Korea, we will be celebrating our 15th year since we banded. Previously we have a long hiatus and this time we just came back with the similar break. So we must show up on stage with a lot more attractive ourselves. I had serious discussion with Changmin in these two years and we are still discussing.