END_OF_DOCUMENT_TOKEN_TO_BE_REPLACED

Official website uploaded scans of TVXQ’s letters to each other (①) and to the fans (②), that they have read out at the YouR PresenT Live in Seoul!
You can find translation of Yunho’s letter to Changmin: here. |EDIT: Translation of Changmin’s letter to Yunho can be found: here | 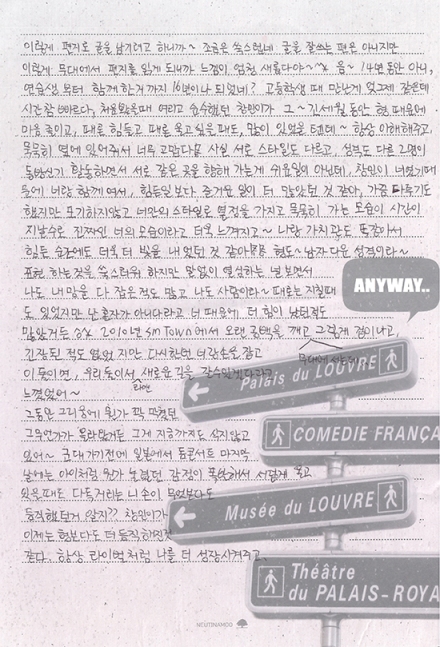 END_OF_DOCUMENT_TOKEN_TO_BE_REPLACED

TVXQ‘s Changmin sent another handwritten letter to fans from the military.

On December 4, another letter that Changmin addressed to Cassiopeia was posted on TVXQ’s official website. In the letter, Changmin spoke about how he misses his fans and also his one and only bandmate Yunho.

But first, after boasting that he became the squadron leader, he goes on to speak at great length about food, saying, “Are you all taking in enough food in preparation for the winter? A few days ago, they gave us fried chicken and I thought I was going to END_OF_DOCUMENT_TOKEN_TO_BE_REPLACED

To. Cassiopeia
members of society
{t/n: because in Korean army = army/society = regular world}

충성 (Loyalty)! This is no. 54 – who even as a recruit, became recruit squadron leader and is fighting (working hard)- Recruit Shim Changmin!

Haha… Are you well? I am managing well.

While reading the internet letters that everyone sent, one by one, on stories about (your) lives in as members of society, about things that are happening in society, our Cavely (Cassiopeia + lovely)’s recent news! All~ I am checking. END_OF_DOCUMENT_TOKEN_TO_BE_REPLACED

충성! (Loyalty!) It’s xx Regiment, xx Company, xx platoon, xx Squad no. 54 Trainee Shim Changmin.
Are you doing well? I am doing very well. I’ve become close to my platoon-mates, my squad-mates; the food too, as it suits my tastes, so I’ve been eating it well like mad.
As my way of speaking is harsh, so please understand! By nature, soldiers speak in a more soldierly and cooler way. As I want to speak in a cooler way, I am also in the midst of working hard.
END_OF_DOCUMENT_TOKEN_TO_BE_REPLACED

Using private browsing mode feature on your internet browser “may” work and help as well.