It’s happening!! soon it will be officially called TVXQ went here and TVXQ went there ヽ(´ω｀○)ﾉ.+ﾟ*｡:ﾟ+!!

Our Yunho and Changmin were spotted together at the pink room at SUM Cafe in SM communication centre! from the accounts, they looked cool with their youthful looks, and seemed to be in a good mood~ ^ v ^

On fans spotting them: 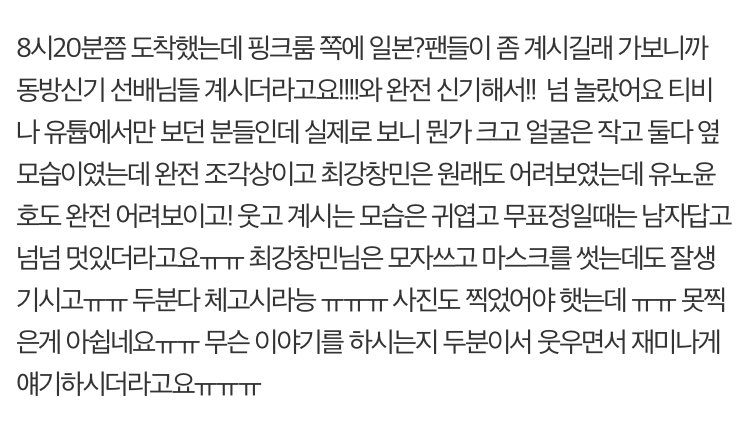 At around 8:20pm, I arrived and as I noticed some Japanese? fans gathered around where the pink room is, I went to see and it was because TVXQ sunbaenim were there!! Wah, as I was completely astounded!! So surprised. I was someone who had only seen them on TV or Youtube so seeing them in person, although it was just their side profiles- they were tall, their faces were small, and they were completely statuesque. Choikang Changmin- originally as well, he has always looked youthful but U-Know Yunho looked totally youthful and! the sight of them laughing was cute. when they had no expression on their faces, they looked manly and so, so coolㅠㅠ Choikang Changmin was wearing a cap and mask but is still good-lookingㅠㅠ The two are both the bestㅠㅠㅠ I should have taken a photo butㅠㅠ as I could not it was a pityㅠㅠ they were laughing and enjoying whatever it was they were talking about.