Yesterday, the press conference for Korea’s SBS PLUS web drama, “I Order You” of whom Yunho and Kim Ga-Eun are playing the leads, was held at SBS in Seoul. “I Order You” is Yunho’s last project before enlistment, END_OF_DOCUMENT_TOKEN_TO_BE_REPLACED

On June 30, MBC‘s new Wednesday-Thursday fantasy melodrama “The Scholar Who Walks the Night,” which is set to air its first episode of July 8, revealed stills of the crown prince Lee Yoon (played by Shim Changmin) and the king Hyunjo (played by Lee Joon Jae) glaring at each other.

END_OF_DOCUMENT_TOKEN_TO_BE_REPLACED

seems they all went bowling together yesterday!

the best pic on my phone. END_OF_DOCUMENT_TOKEN_TO_BE_REPLACED

[Spot] Jung Yunho, “”I Order You” Makes Me Feel All My Efforts Pay Off”

“I Order You” is a romantic comedy based on the namesake webtoon. It will depict a love story between handsome chef Yeo Guk-dae (played by Jung Yunho) and Song-ah (played by Kim Ga-eun) who has been in many relationships. The drama will be portrayed with FL-ada as the backdrop, which is an atelier specializing in handmade lunchboxes. Jung Yunho was cast to play as Yeo Guk-dae, owner and chef of FL-ada who is a chic, picky and principled man.

“After meeting the director and having a talk with him for a long time, I decided that I should join this drama. His human side won me over. I had a feeling that it would be a well-made drama that is well structured,” said Jung Yunho. “Unfortunately, I am not that good at cooking, to be honest. However, this drama is not all about cooking after all, and I thought it would be interesting to portray a story about love and life within cooking. Moreover, Guk-dae’s personality which I don’t possess also attracted me,” he continued. END_OF_DOCUMENT_TOKEN_TO_BE_REPLACED

Headlines and Highlights translated by @snxy: 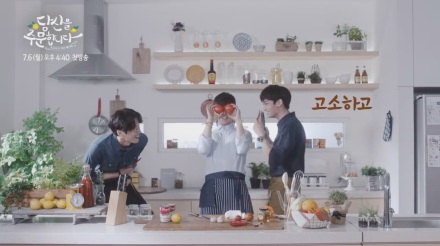 You could watch it on SBS Plus facebook here: link